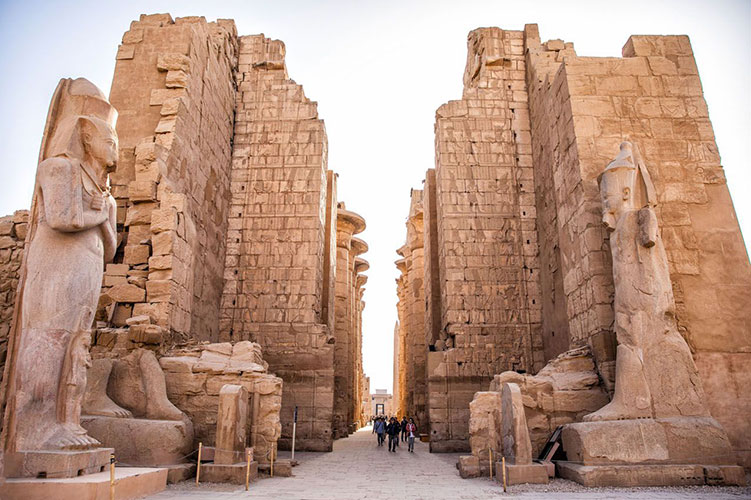 Looking for a cheaper tour to Egypt? This would be your most perfect choice. An overland tour in Egypt with the best services and the most competitive prices.

In this great short tour of Egypt, you will be exploring the wonders of Cairo at the beginning. Afterward, you will discover all the secrets of Pharaohs in Southern Egypt by visiting the highlights of Luxor, Aswan, and the charming Temple of Abu Simbel.

Once you arrive at the Cairo International Airport, one of our best tour representatives will be greeting you.

You will be riding one of our comfortable air-conditioned vehicles to your hotel in Cairo. Check-in the hotel and have some rest to be ready for a magnificent overland Cairo, Luxor, Aswan, and Abu Simbel tour and overnight in Cairo.

Morning Breakfast at your hotel restaurant, then join your private Egyptologist Tour guide in an amazing tour to visit the highlights of Cairo. Start your visits with the most famous and marvelous site of Cairo, The Great Pyramids of Giza, which is the most amazing architecture of ancient Egypt. These huge startling structures served as the tombs of the kings of Egypt. The great about these pyramids is that the construction methods are still a mystery until today.

Then to the treasure of Egypt, The Egyptian Museum. which is considered as the biggest museum in the region and hosts the largest collection of ancient Egyptian displays. This impressive museum includes the golden collection of King Tut Ankh Amun and the Mummies’ Hall.

At the end of this interesting tour, you will return back to your beloved hotel in Cairo to spend the night and get ready for the next day.

Have a great morning by enjoying your delicious breakfast at the hotel and get ready for the rest of this marvelous overland tour.

Today, you will be exploring the amazing Luxor, or ancient Thebes, where the Pharaohs really flourished and shined.

Our tour representative will take you to the Cairo International Airport to take the domestic flight to Luxor.

Upon your arrival in Luxor, the tour will start in the West Bank of Luxor by discovering the secrets of the Valley of the Kings. This ancient burial site was used for more than 500 years to host the dead bodies of the kings of Egypt starting from the 16th century BC. You will find the most impressive tombs belong to Tut Ankh Amun, Thutmose III, and Ramses III.

Moving on with this charming tour you will visit The Temple of Hatshepsut, This temple considered among the most charming examples of mortuary temples to be built in Egypt. It was established by Queen Hatshepsut more than 3500 years ago. The temple includes many marvelous sections like the Chapel of Anubis, the Chapel of Hathour, the notable statues of the Queen disguised as a male pharaoh, and many other places to explore.

Your next visit of today will be to The Colossi of Memnon. Named after Memnon, the Greek legendary hero as one of them used to produce humming sounds. These two huge statues are around 18 meters and they are the only existing sections of the mortuary temple of Amenhotep III.

Now, it’s time to have some delicious food in one of the finest local restaurants in Luxor.

Continue This Luxor tour by visiting the most magnificent historical sites of the East Bank of Luxor.

In the East Bank, you should start with the Karnak Temple which is the largest and most amazing temple of ancient Egypt. The special about this marvelous temple is that the construction took more than 2000 years to be completed as each king of Egypt wanted his own contribution to be added to the Karnak.

Then you should move on with this tour to the amazing Luxor Temple. This temple represents an open-air museum of ancient Egyptian art and architecture as it was established during the 14th century BC. You will find there a great variety of constructions and layouts as many rulers of Egypt had their own sections at the temple including Alexander the Great.

After finishing this comprehensive tour in Luxor, you will return back to your desired hotel to spend a relaxing night.

After having your breakfast in the early morning, you will check out the hotel in Luxor. Don’t forget to keep your excitement for the coming fun at the rest of this interesting tour.

Today’s journey will be at Edfu city where you will be exploring the Temple of Horus in Edfu. This temple is the biggest and best-preserved Ptolemaic temple in Egypt. The temple includes wonderfully decorated walls and stone capitals which were completed during the 1st century AD after 300 years of construction work.

Don’t miss discovering the wonders of the Temple of Kom Ombo. It is one of a kind in Egypt as the temple consisted, internally, of two complete temples; the first dedicated to the crocodile god Sobek, while the other is dedicated to the god Haroeris. It was established more than 2000 years ago.

This amazing journey has no end, you will continue towards the South traveling to Aswan.

First, you will check in the hotel in Aswan, then start touring Aswan, the Southern gate of Egypt, and one of the most amazing cities.

your visit now will start with the High Dam, the most wonderful architectural achievement of contemporary Egypt. This dam was built by the former Egyptian president, Gamal Abdel Nasser. Now, the High Dam produces a large amount of the electricity of Egypt and also preserves the water of the River Nile.

Then move on with this tour and visit The Philae Temple, the best example of Potomac temples that was finely preserved. It was a central hub for the worship of the goddess Isis. The whole complex was relocated to the Agilkia Island after the construction of the High Dam in a huge project led by the UNESCO.

Don’t miss the most visited site in Aswan, the Unfinished Obelisk. During the era of the New Kingdom, this huge obelisk was going to be the largest in the history of mankind. However, workers left it due to problems at its bottom.

After this wonderful day tour in Aswan, you will be going back to your hotel in Aswan to have a great night sharing today’s memories.

Enjoy the dawn view mixed with the natural beauty at Aswan, then get ready to start today’s tour towards Abu Simbel.

You will check out the hotel in Aswan and go for a ride in modern air-conditioned vehicles towards Abu Simbel in less than 3 hours.

It's time now to be visiting the Temple of Abu Simbel, the greatest temples of ancient Egypt to be built in Nubia. This temple was constructed by Ramses II and featured with its rock carved façade that contains four huge statues of the king. There is also the never less amazing smaller temple dedicated to Queen Nefertari. The whole complex was dismantled, transferred, and rebuilt in its current location in the 1970s after the construction of the High Dam.

After your visit to this amazing temple of ancient Egypt, you will be heading back to Aswan Airport. Here you will reach the end of this wonderful tour passing by all these priceless sites and places.

Price Starts From
995$
Per Person

05 Days Luxor to Aswan Cruise in the Christmas